Skip to content
HomeHealthThe Bridgertons’ locations: the spectacular manor houses, palaces and gardens where the Netflix period series you miss the most is filmed

Almost a year has passed since the premiere of The Bridgertons and in all this time we have consoled ourselves by discovering what awaits our favorite characters in the second season of the fiction produced by Shona Rhimes. But since this is no longer enough, and we continue to be amazed by their scenarios, we have decided to review the spectacular stately homes, palaces and gardens in which the Netflix period series takes place.

Although it takes place in London in the 19th century, The production has been shot in locations scattered around the English capital and in locations located, for the most part, in the south of the country. But if there is one city that stands out above all, this is Bath. Recognized as a UNESCO World Heritage Site in 1987, this city of close to one hundred thousand inhabitants has museums and buildings of great historical importance that make it an essential setting for productions such as The Bridgertons. 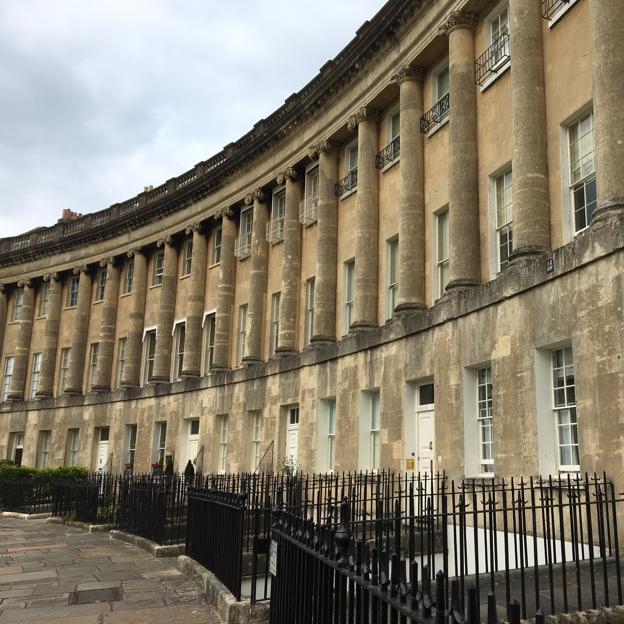 That’s where the Royal Crescent is located, the set of semi-detached buildings in the shape of an elliptical curve in which the Featheringtons live and that we see in various transitions throughout the series. Built at the end of the 18th century, its main charm is its characteristic Ionic columns, a total of 140 distributed in a total of 30 houses, of which a third retain their original Georgian distribution.

A fifteen minute walk, at number 2 Abbey Street, we can find one of the most important stages of the series. The shop where seamstress Genevieve Delacroix serves her high-society customers and makes her dresses as social events turn into gossip. It is actually a cafe, the Abbey Deli, which transformed its window for filming the scenes that take place outside.

With another small walk, in which we will cross one of the most touristic places in the city, the Pulteney Bridge, we will arrive at another of the Bridgertons scenes in the city, Lady Danbury’s house. Opened at the end of the 18th century, throughout its history it has housed a hotel and a private house, but today it is a museum in which the collection of Sir William Holburne is exhibited, made up of Chinese porcelain, paintings by English artists. , Italian marble sculptures and a space dedicated to modern art. 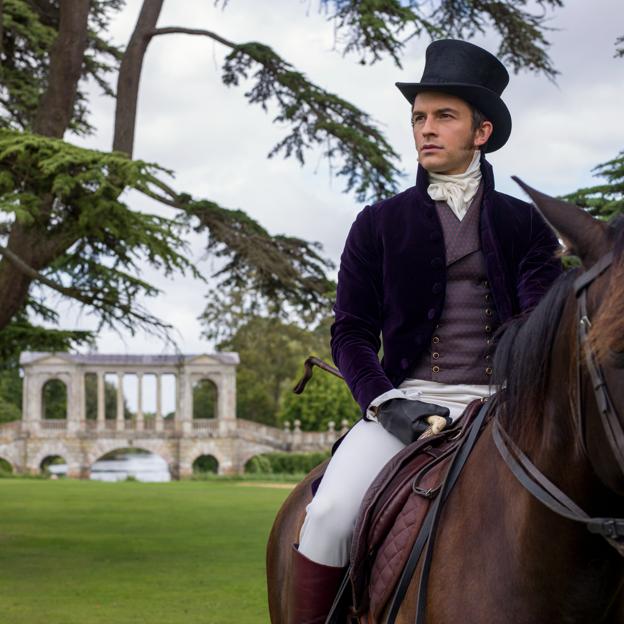 Fifty kilometers from Bath, in Salisbury, is one of the most used country houses for production, Wilton House. And for the English audiovisual industry, since some of the scenes from The Crown are also filmed there. In The Bridgertons, this building that was originally an abbey is used to represent the facade of the house of the Duke of Hastings in London, while the room known as the Double Cube Room is used to host the event where Queen Charlotte meets the young debutantes. But in addition, in its beautiful gardens, where we find the Palladio Bridge, several scenes have also been shot that, in fiction, took place in Hyde Park.

And since we are abroad, and enjoying beautiful historical buildings, in the county of Buckinghamshire is one of the most visited gardens in England, the Stowe Lanscape Gardens. Owned by The National Trust since 1989, this eminently English landscaped garden has over a thousand square meters with numerous arches, bridges, statues and even temples that make it an essential visit for lovers of this type of place. In The Bridgertons they opted for the Temple of Venus, built at the beginning of the 18th century, to host the party at which Daphne and Simon sign their pact. 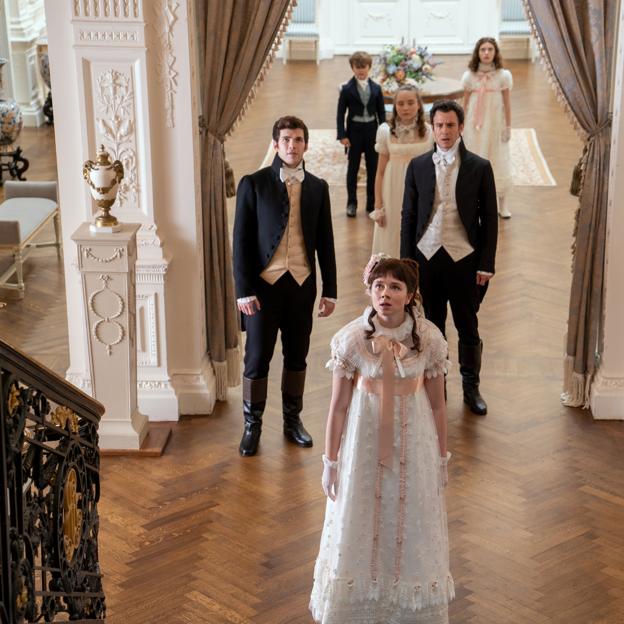 The Bridgerton brothers in front of the steps of Halton House. / Netflix

At this point, the time has come to discover the place where the quintessential setting of the series is located, the house of The Bridgertons. Or rather, the scenarios, because between the interior and the facade there are almost a hundred kilometers. The entrance, the beautiful staircase and one of the rooms that we see in the Netflix series are located in Halton House, also located in the county of Buckinghamshire. Built in the 19th century, it has also been the setting for The King’s Speech, Downton Abbey, Endeavor and The Crown, as well as the French home of the Duke and Duchess of Windsor.

The facade of the home of the protagonist family is found in the London neighborhood of Greenwich, at Ranger’s House. After being built in the 18th century for Vice Admiral Francis Hosier, it was later inherited by the 4th Earl of Chesterfield until it was occupied by the Duchess of Brunswick. In the autumn of 1888, at the invitation of the queen, Marshal Lord Wosseley and his family moved there. And as expected, we will see her again in the second season of The Bridgertons. 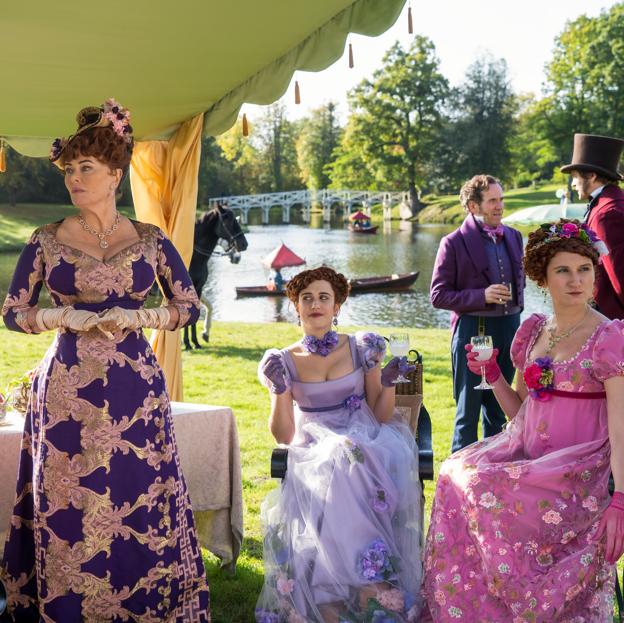 The Featheringtons enjoying a sophisticated picnic at Painshill Park. / Netflix

Another site that has divided its settings into several buildings is the St. James Palace, the residence of Queen Charlotte. Because it is in London’s West End neighborhood where Lancaster House is located. Built by the Duke of York in the 19th century and envied by Queen Victoria, this spectacular mansion is used in fiction for set the scene for the queen’s reception where Prince Friedrich presents Daphne with a beautiful necklace. But we have also seen it in The King’s Speech and, again, in The Crown.

In chapter 3 of The Bridgertons, with Simon and Daphne growing closer and her rejecting various suitors, The Featheringtons and the main family meet outside on Primrose Hill for a lavish picnic. These scenes were actually shot at Painshill Park, located in Cobham, in the county of Surrey. Open to the public, it is one of the best examples of an English landscape park from the 18th century and among its most characteristic places we find a Chinese bridge, a Gothic temple, a hermitage or a Gothic tower. 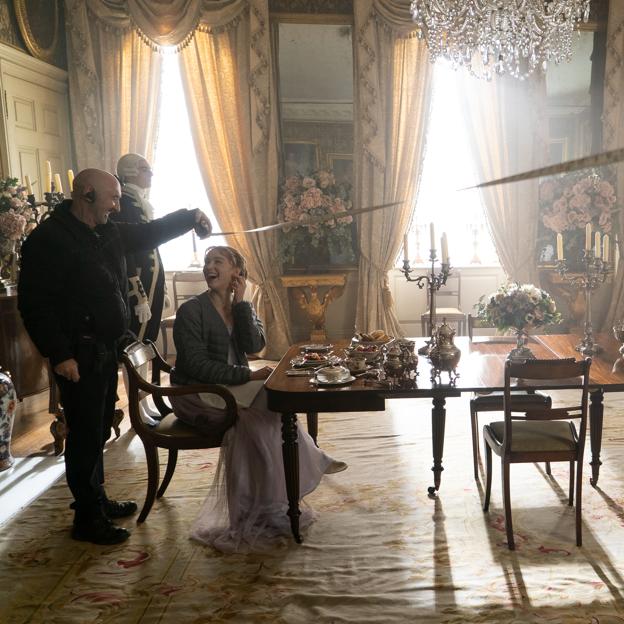 Phoebe Dynevor about to shoot a scene at Castle Howard. / Netflix

With the relationship made official, Daphne and Simon they celebrate their wedding night in a house that doesn’t quite meet her expectations. Still, Dorney Court, where it was shot, is a Tudor-style manor house located on the banks of the River Thames near Windsor. Despite appearing to be a medieval construction, it was built in the 11th century, part of the exterior is a Victorian reconstruction, and its interior remains practically the same as that of the 16th century. It was shortly afterwards that it became the property of the Palmer family, who have lived there ever since.

This journey ends, like Daphne and Simon’s, at Castle Howard, the series’ northernmost setting, located in the county of North Yorkshire. This spectacular manor house serves as the Duke’s Clyveden Castle, and in the series we can see them in several of their rooms, but alsoin the beautiful Temple of the Four Winds. From there you can enjoy a beautiful view of the countryside or use it as its former owners did, to have a picnic or enjoy a pleasant read. As for the main building, its asymmetrical façade and baroque decoration have served as the setting for various productions, including the films Barry Lyndon and Brideshead.