The villancio already says it: «oh, sweet Christmas!». And it is that these Holidays, far beyond family celebrations (when possible), traditions (religious or not) and the decoration of our houses based on glitter and lights, are the best excuse of the year to eat a lot of sweet and good. Because yes, seafood, sea bream and roast are very good, but here we have come to play, and what we all look forward to at Christmas gatherings is the moment when they are taken out. the trays full of nougat, marzipan, mantecados, polvorones and other delicacies with high doses of sugar. After tasting the best roscones de Reyes and the most exquisite panettone, today we take a gastronomic trip through Spain to review the typical Christmas sweets of each region. Let the party begin!

The first stop on this sweet Christmas trip is in the Valencian Community, where we find the best nougat in the world (and we do not accept discussion): the one from Jijona, that delicious semi-soft pasta flavored with toasted almonds, honey, egg white and sugar, that smears your fingers and makes your heart happy; Y the one from Alicante, hard and exquisite, with its pieces of toasted almonds wrapped in honey and egg, and covered with wafers. Two artisan delicacies with a Mediterranean flavor that cannot be missing from any Christmas table.

And if nougats are essential, it is no less so marzipan from Toledo, those figurines that you will not be able to stop eating because of its unbeatable and smooth mixture of almonds, sugar, honey and eggs. Of Arab heritage (remember that Toledo was the city of the three cultures), legend has it that the apothecaries of the Hospital de Santiago de los Caballeros for the sick of the Granada War were in charge of making these sweets for the patients. We don’t doubt for a moment their ability to perform ‘miracles’ when you try them. The best? Those of the Obrador de Santo Tomé, which has been making them in the traditional way since the mid-nineteenth century.

Those who prefer heavier bites, need to leave room after dinner to try the polvorones of Estepa, the mantecadas of Astorga (flour, egg, sugar and fat, all well baked), the citron cortadillos that they have been preparing in La Campana, Seville, since 1885, or the puff pastry of Torrelavega (and other sweet delicacies from the White Confectionery, also since the end of the 19th century). 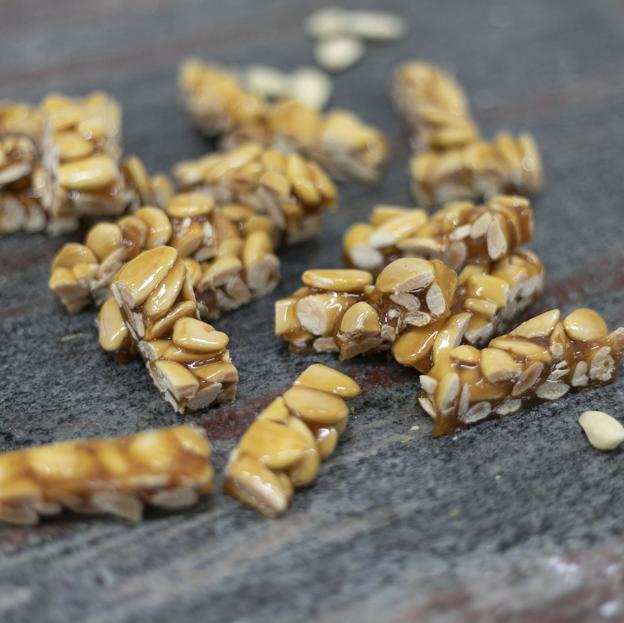 Almond soup, a kind of hot milk porridge infused with lemon or orange and cinnamon to which crushed almonds are added in the mortar, it is a typical dessert that is usually eaten on Christmas Eve and Christmas in different areas of Castilla; while the guirlache, traditional from Aragon and of Arab heritage, seduces us with its incredible combination of almond, honey and sugar with anise. In Catalonia, the typical sweet of these festivals are the neules, some waffles baked with flour, sugar, egg white, lemon zest, vanilla essence and butter, which the Tió ‘throws’ to the children on the night of December 24 and which, according to tradition, was part of the celebration of the Mass of the Rooster in the region since the mid-15th century.

Without a doubt, Christmas in our country cannot be sweeter, and of course, Those who do not want (only) roscón de Reyes or panettone, have a great variety to choose from on these dates. Happy Holidays!