Skip to content
HomeHealthCasa Alía, the online store of the interior designer Tomás Alía who wants to make traditional crafts fashionable (and he is going to do so)

There are many crafts; crafts, nor do I tell you; but there is very little excellence, says Tomás Alía (Lagartera, 1964) about his latest and most emotional project, Casa Alía, an online store of decorative pieces made by hand and in our country by masters of ancestral crafts, which he himself has curated. About a year ago, the interior designer, who is a member of the Contemporary Association of Arts and Crafts, convinced his partners: Our intention is to save crafts and that workshops do not disappear, but how can we do it? We are going to map Spain to find those workshops where artisan mastery still lives. After months of travel, toil and interviews, from the glazed earthenware tableware from Úbeda to the poplar wood chairs from Aragón, the best in arts and crafts, has its space at Casa Alía. On his journey, he has come across stories such as that of the nonagenarian teacher from a workshop in Fajalauza, in Granada. He belongs to the fourth generation of a family that, for centuries, has practiced this trade and told me: I have no money. If I die, this disappears. Our commitment is not to allow it, continues Alía, who has selected some 200 objects and has adapted them to contemporary language. There are many people who think that crafts are old and obsolete, who does not know how to live with these pieces in a modern house, explains the decorator, who has been in charge of staging the photographs on the web (the same ones that illustrate this report), which would not clash on Pinterest, TikTok or any other millennial network. The interior designer has shown that, well combined, this aesthetic generates photogenic and emotional interiors, because you feel a greater bond for an object when you know that it is unique and you know its history. 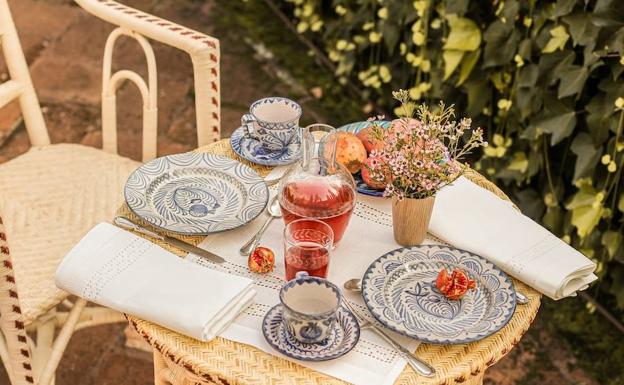 Casa Alía looks to the past, but it is a seed for the future. The old trades are based on concepts that resonate with the new generations, such as the circular economy and sustainable processes he reflects. Saving crafts we also strengthen the link with emptied Spain … How do we fill in the villages? With manufacturing, but for that it is necessary that crafts receive more support, he adds. In his trip (and in the Casa Alía catalog) he has not only found venerable old people: we have met very young people with a formidable preparation who love nature, the territory and the idea of ​​identity, of the singular.

Because this project also awakens self-awareness. Spain is very rich in crafts, precisely because of our differences, because of the plurality of the regions. And that difference is manifested in what is handmade, in what is slow, in what is forever, Alía tells about a heritage of which we should be more proud. It is difficult for us Spaniards to get the most out of what is ours. Spanish crafts also need a foundation to support them, such as Bettencourt in France, which makes even the big fashion firms claim their masters. With the necessary support, we will be able to defend the artisan excellence of the manufacture, which is the true Spain Brand. (casa-alia.com).